where to go
where to stay
where to eat
where to drink
where to buy
THE BROTHERHOOD OF MAN, GEORGIAN WINE, & THE CHRISTMAS SPIRIT

The Brotherhood of Man usually seems like an abstract concept, but when total strangers invite you into their home to feast on local specialties, nothing could actually feel more concrete. Paradoxically, the countries in which I’ve experienced the most selfless and genuine hospitality are also the same places where I’ve encountered virulent paranoia, prejudice, and ignorance. Both seem to be man in his primordial state. In my travels, three countries stand out for both extremes: Syria, Libya, and Georgia. These also happen to be my favorite places on earth and the focus of my professional life over the last fifteen years.

Despite many Middle Easterners being filled with conspiratorial fears about outsiders, in general, and Arabic-studying Americans and “New Yorkers” in particular, I’ve never been made to feel as welcome and as spiritually connected to humanity as I have in the greater Middle East. During my years in Syria, it seemed like a daily occurrence that taxi cab drivers insisted that my ride was free -- because I was helping international understanding by being in Syria -- while strangers that I asked for directions, got off their motor cycles and jumped into my family’s rental car to personally take us to our destination. I’ll never forget the time, in 2002, that upon hearing I was from Manhattan and engaging in a conversation about being a humanist in the new millennium, a cab driver shed a tear and gave me his key chain depicting the World Trade Center, where he had been in the 1980s.  True, I’ve also seen the inside of a few different Syrian jail cells at the airport and the Jordanian border, been kidnapped and held at gunpoint by Kurdish rebels, and had my Shi’a friend steal my tennis racket after reporting me to the authorities for being a ‘covert Fulbright scholar.’

Returning to the plus side of the ledger, in all the years that I’ve visited Libya, I’ve rarely paid for a meal – business colleagues, acquaintances, and even bystanders (who witnessed me dining alone) all falling over themselves to beat me to the check. I’ll also never forget the time that a shopkeeper mobilized his entire social network to ensure that I wasn’t late for a meeting with a former prime minister. Or the other time that a cabbie, after hearing about my doctoral research at Cambridge about Britain’s relationship to the Sanussi Sufi Order, arranged to drive me for free the whole next day on the condition that I gave his children a lesson about Libyan history. On the other side of the equation, I once got stopped at the metal detectors inside the entrance to the Corinthia Hotel and after giving my American passport, I was accused of being a Lebanese spy searching for evidence of Musa Sadr’s murder. When I explained that I had no Lebanese origin at all, I was told that my accent in Arabic (which is actually distinctly Shammi, i.e. Syrian) and my green eyes (which are actually quite hazel) proved otherwise. I was duly detained and the number of secret police who followed me every evening from the hotel into the old city for my traditional hookah and backgammon increased from one to three. 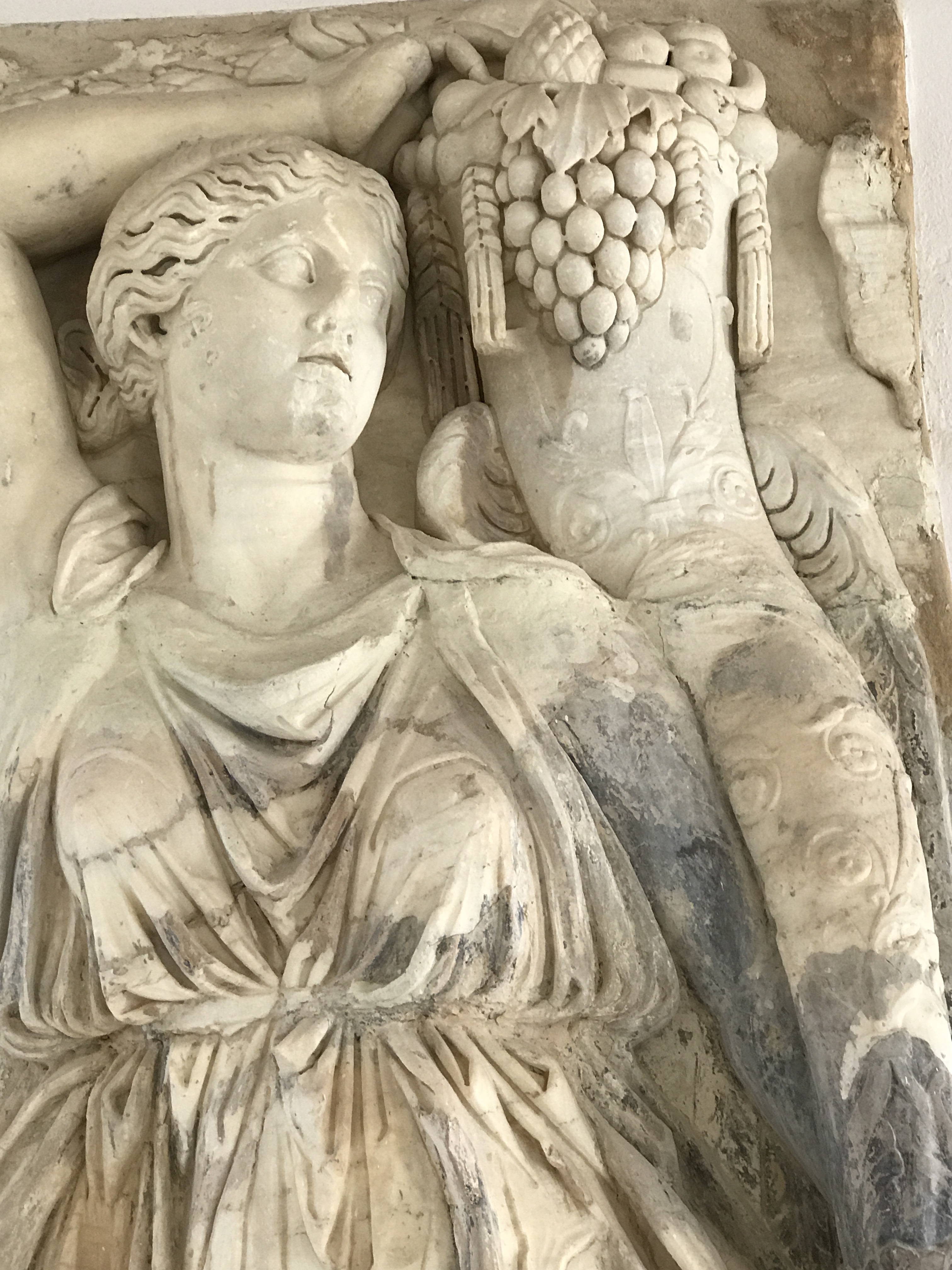 But looking back with more than a decade’s remove from these incidents, the tribulations have grown in hilarity, while the hospitality has multiplied in its life-affirming warmth. Seen with hindsight, the kindness of strangers does more for us than give us a tasty morsel or a soft bed, it renews our faith in humanity. It was first in the Middle East that I experienced the true Christmas spirit: to give that which is precious and irreplaceable to a complete outsider, without ever expecting to receive. And this sense of hope, and of human goodness, is what I would wish to share with all my colleagues, friends, and family this holiday season. To be honest, I’d even like to share it with my enemies – if only they would get out of their own narratives long enough to listen.

In today’s hyper-partisan and technologically advanced times, many urban Americans are increasingly cut off from traditional patterns of community and hospitality. For me, the Middle East Institute differs from other think tanks in that it doesn’t simply study the Middle East as a “Foreign Policy problem set” facing Americans, but cherishes how the aesthetic creativity and cultural contributions of the region can highlight our shared humanity and interconnectedness.  In my practical experience, the Christmas spirit has always been best exemplified by Middle Eastern hospitality and its traditional food and beverage practices.

Therefore, this Holiday Season – dear reader -- might I suggest a return to the essentials. The greater Middle East is the birthplace of both Christianity and wine. This year why not return to basics with some  Georgian wine at the holiday table? Wine is central to Judeo-Christian rituals. It is a requirement for the eucharist – as well as for Shabbat and Passover. A more secular property of wine is its ability to encapsulate a sense of place and epitomize the traditions of a culture. 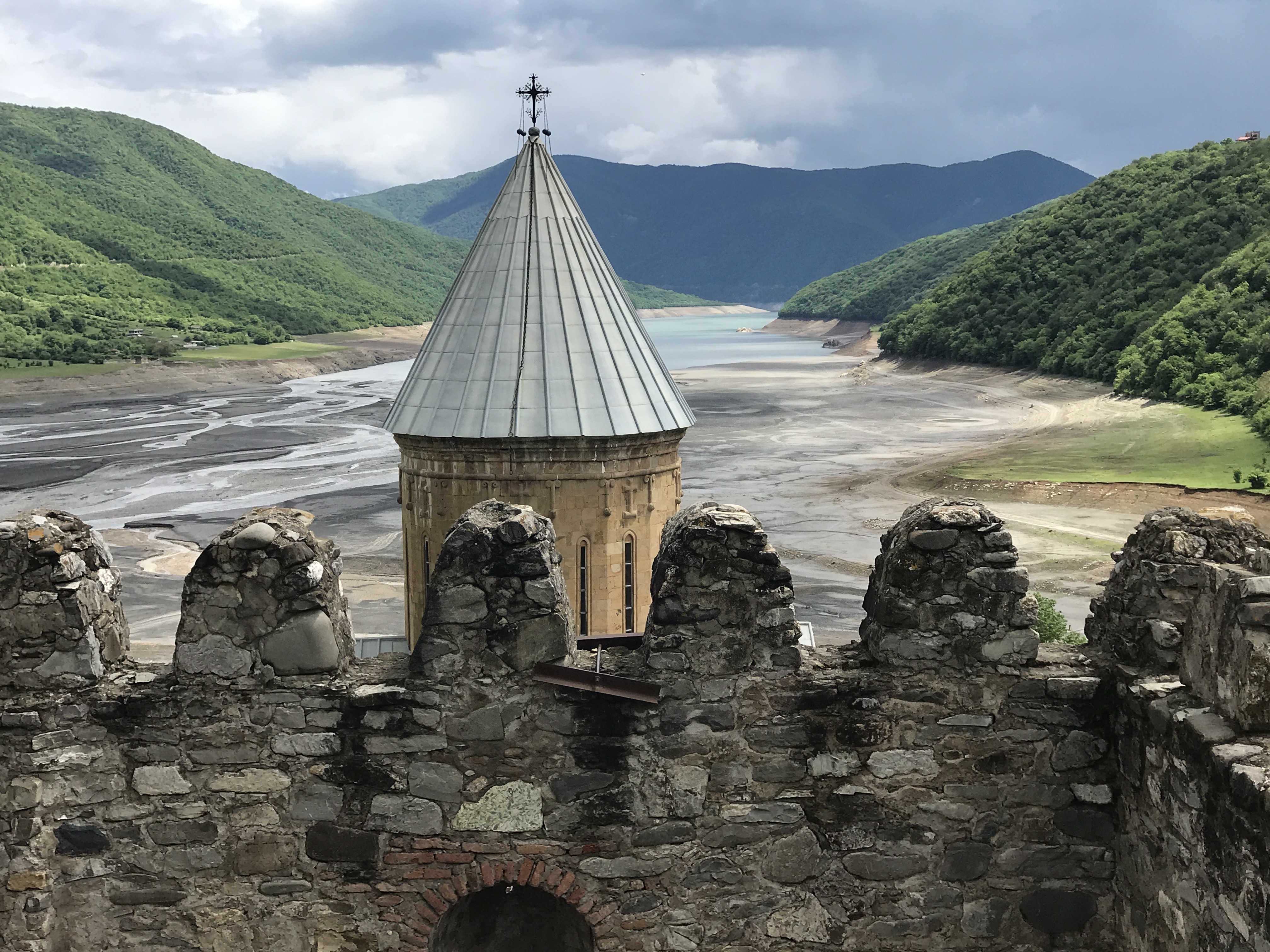 Nowhere does it fulfill this function better than in Georgia – a country in which most non-urban households make their own wine, and elaborate feasting rituals for guests and family is a monthly occurrence. Georgia is not only the birthplace of wine, it is home to over five hundred indigenous grape varietals and an array of wine styles, many of which are the closest we can taste today to what the ancient Christians (as well as Greeks, Romans, Sumerians, and Israelites) drank. Georgia’s most emblematic contribution to the world of wine is the Qvevri – the uniquely shaped large clay vessel that controls temperature and oxidation, while facilitating the vinification of skin contact wines. Wine likely was ‘invented’ in Georgia 8000 years ago, because the clay from the Alazani river in Kakheti has special properties that lend itself to making airtight vessels.

When Jesus turned water into wine, he almost certainly turned it into unfiltered, claypot fermented wine with no added sulphites. And when the last supper was eaten, the wine it was washed down with was likely quite similar from a visual, flavor, and textural perspective to today’s Georgian Amber wines – (although it might have been a bit sweeter and a bit weaker -- as addition of water, sugar, and/or spices were highly common in the Greco-Roman world at the start of the Common Era).

Prior to the Greeks and Romans with their addition of water and spices, all ancient Mediterranean and Near Eastern cultures fermented, aged, and transported their wine in various types of clay jars. They also didn’t add yeast or remove the skins and pips of white wines during fermentation – likely giving them that cidery funkiness and tannic earthy-ness that epitomize the best of today’s natural and Georgian wines. The Ancient Romans invented sulphite addition (to stabilize wine for transport) as well as separating the must from the skins, fining and filtering (all to increase clarity and remove impurities), but these were never the default methods of vinification in the ancient world. 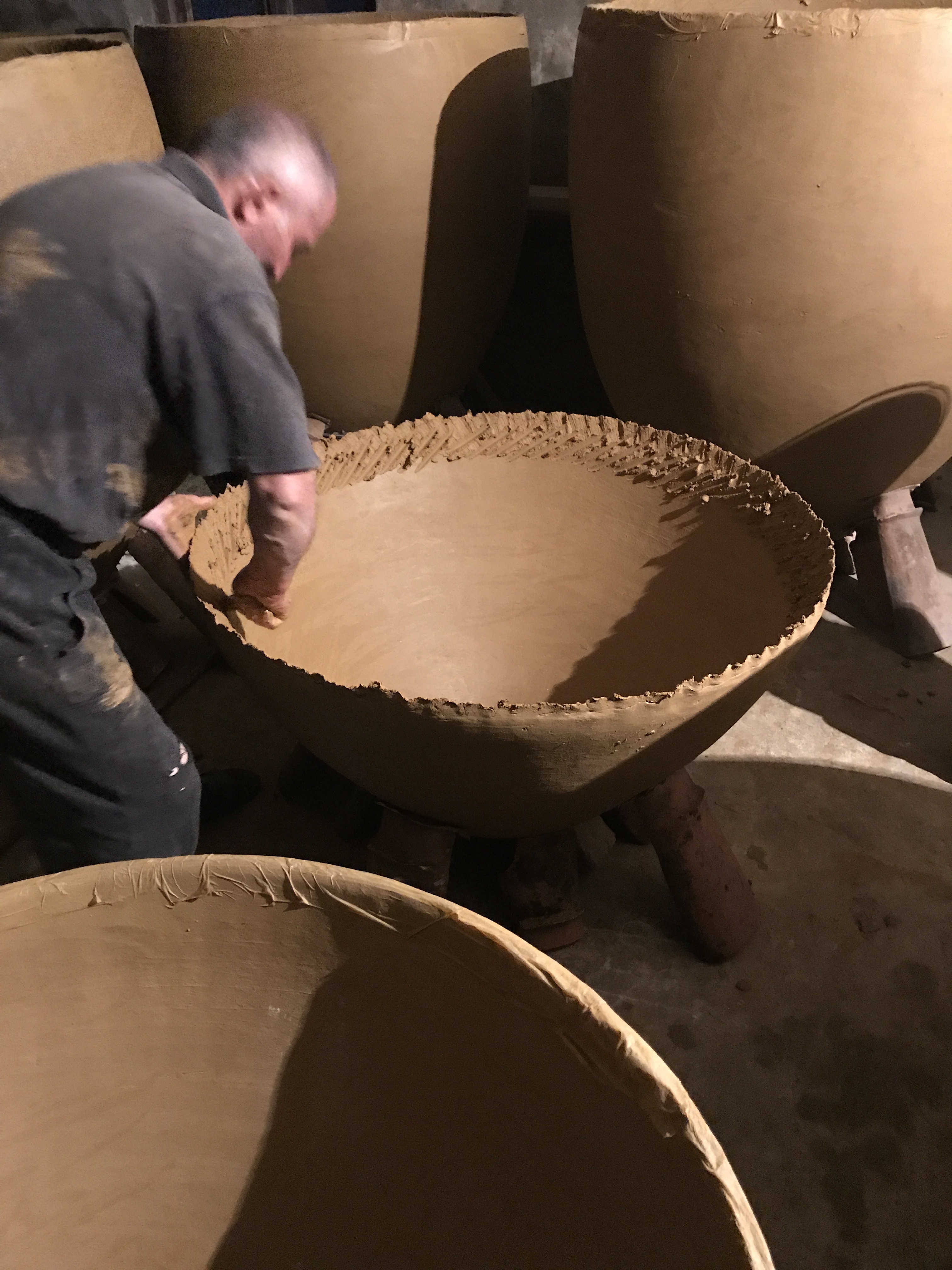 The traditional methods of vinification were gradually abandoned throughout most of the Western world from late Roman times onward as “improvements” in science allowed for the introduction of novel techniques to reduce spoilage, decrease labor, increase yields, and better facilitate transport. As such, oak barrels and various other vessels began to replace claypots. By the late 18th century oaking, sulphite addition, fining, filtering, as well as yeast addition had all become standard in all fine wine regions. It was only in the Caucasus that truly ancient and low intervention winemaking techniques remained the default.

But then after WWI and the ensuing Soviet occupation, Caucasian wineries succumbed to the industrialization and collectivization of viticulture. As such, authentic wine traditions were mostly abandoned in favor of increasing yields, factory-style production and resulting mediocritization -- borrowing the worst of the innovations of Western winemaking. Throughout the bleak Soviet years in Georgia and Armenia, traditional winemaking was usually preserved in the monasteries. Since the Russian boycott of Georgian wine in 2006, the Russo-Georgian War of 2008 and the opening of western markets, it has witnessed a remarkable resurrection over the last decade. On the consumer side of the drama, hipsters, vegans, naturalistas, and wine nerds have all played their parts. While on the producer side, many of the protagonists in that drama have been driven by their Christian faith, love of homeland, and desire to return to their roots.

To me nothing conveys the spirit of Christmas like the generous body, hearty tannins, meatiness, and ripeness of black fruit of an aged Kakhetian Saparavi made in Qvevri.  As someone raised in a secular home with a vast cellar, but without many spiritual traditions, wine has always brought me closest to other worldly divinity, as well as to family. Despite being a devotee of the Danish philosopher Soren Kierkegaard, I’ve never been able to undertake the leap of faith necessary to experience the suprarational harmony contained within the doctrine of the resurrection. But possibly the only time I can come close to basking in suprarational bliss might be at a supra while savoring a floral, yet tannic, and apple-y Amber wine like a Kakhetian Kisi (Dakishvili and Tchotkiashvili make my two favorites). For something even more elegant and mystical, try the savoury, yet delicate wines from the western-central Georgian region of Imereti --those from Georgia’s most famous female winemaker, Baia Abuladze  are to die for especially her Tsolikouri blends. 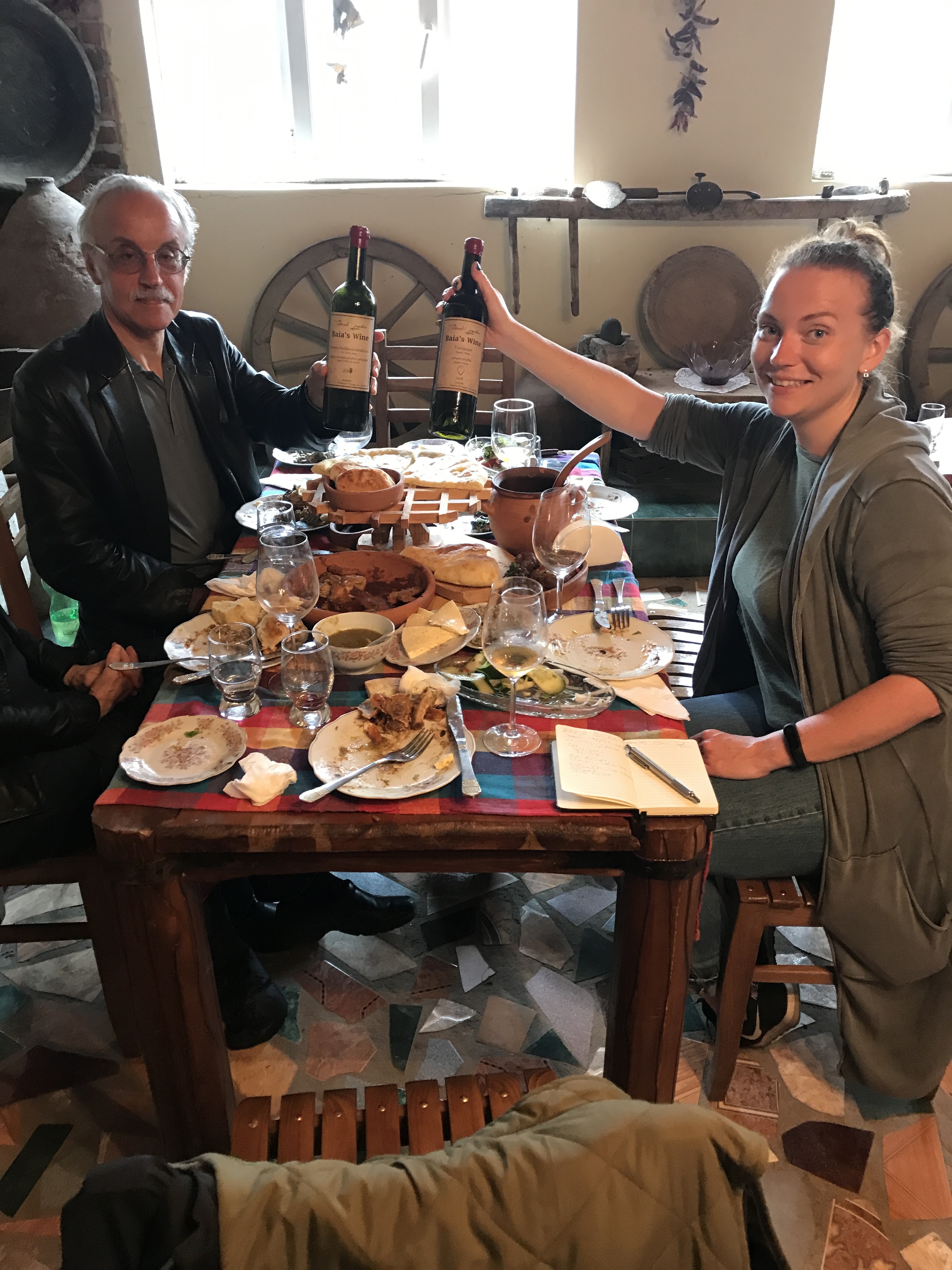 At its best amber wine defies human logic – the combination of texture, florality, salinity, and acidity somehow producing balance and elegance seems far more inconceivable than the virgin conception. Yet, if you are looking for a wine that truly defies the intellect, try the Chakvevri noir de blanc from Dato’s winery in Guria (the extreme Western part of Georgia bordering Turkey). It is a white wine (that looks Amber), made from red grapes, vinified in Qvevri, but without skin contact. I am working my way through several cases, and each time, I discover something different in the wine. Last weekend’s, paired brilliantly against both a skate in parsley/butter sauce and against rabbit in mustard. It tasted of savory versions of caramelized apple and butterscotch – it was completely unctuous, while having low alcohol content and no residual sugar. And the theologians think the Trinity is a genuine mystery! I do feel it might have been inadvertently unchristian of me to buy nearly 5% of the winemaker’s total production and nearly 20% of the total export to the United States.

Humor aside, I lack much spiritual practice in my life, except for the elaborate wine tasting and discussion ritual that I practice nightly and impose on all guests. Sharing a superlative bottle with someone special, makes me feel the deepest human communion. As we both drink and the intricacies of the wine linger on our tongues and in our minds, the shared experience connects us to each other, to our ancestors, and to inherent brotherhood of all humanity. Merry Christmas.

Jason Pack is a Non-Resident Fellow at the Middle East Institute, a former competitor on the University of Cambridge's Blind Wine Tasting Team, Founder of Libya-Analysis LLC, and a frequent op-ed writer covering issues of geopolitics, culture and wine.

A version of this article was first published by the Middle East Institute's Frontier Europe Initiative Program.