Georgia is the homeland of wine and it is easy to forget that beer-making is also an old tradition from the Caucasus. Beer-brewing was introduced to Georgia from the countries of the Old East, Ancient Egypt, Iran and Mesopotamia. Beer-making presupposes the existence of a strong culture of wheat. Archeological discoveries show that back in the 7th century BC, Georgia was already growing wheat, especially in the mountains, while the plains had vineyards for wine. Mountain dwellers in Georgia, living in Khevsureti, Tusheti, Pshavi, Gudamakari and Khevi, celebrated traditional occasions with beer. It was the main alcoholic beverage and played an essential role in cults and religious rituals. Beer was supposed to open a divine gateway, beyond which the Gods lived. The beer was produced from barley, which is thought to give beer its best qualities.

In these regions, people make beer by boiling: once they have the proper mass of grain, they add as much water as there is flour in the tun. The mixture of barley and water needs to be constantly stirred and the heat carefully controlled. When boiling the mixture, the mass increases and needs to be moved to another pan where more can be added. When the mass reaches the desirable level, the boiling process is done and the mass is cooled and tasted. They use the hops for the dressing.

Among traditional Georgian beers, Tushetian Aludi is the best-known. To this day, Tushetians brew Aludi, mostly for the summer religious feast called Atingenoba, a great festival of the folk arts. Atnigenoba starts on the hundredth day after Easter and continues for two weeks. This tradition cannot take place without beer, which they brew just before the beginning of the feast. In Khevsureti, drinking beer is also a traditional rite of passage and initiation, with boys as young as fourteen encouraged to drink it as a sign of maturity and meaning he can be a member of the brewing team. Young children are also given a small mug of beer during festivities and are marked with coal on the forehead so that they are not given a second! 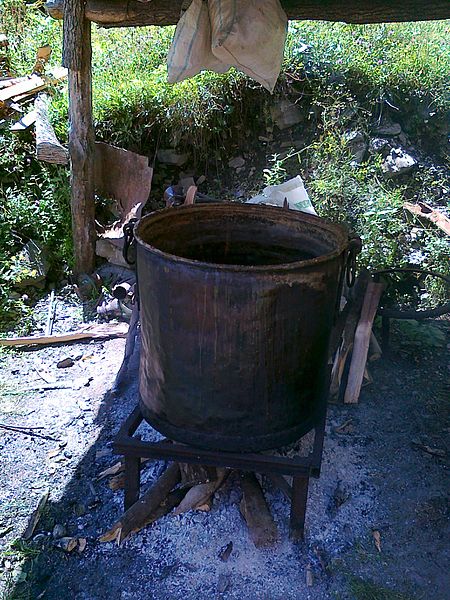 Nowadays, there are many Georgian companies that produce beer. While many have kept the old traditions of brewing, they also produce beer by using new technologies. Despite a strong tradition of beer-making, local beer companies such as Argo and Icy have to compete with beer producers from Austria, Czech Republic, Germany, Italy, Russia, Turkey
and Ukraine, which are the main countries importing to Georgia. The market of craft beer and local brewing is slowly developing in Georgian cities and especially in Tbilisi, where craft bars open almost by the month. However, the best place to taste Georgian traditional beer is still in the mountains!